I conducted my first Rust Language workshop at FISAT as part of ICEFOSS 16, an annual FOSS festival. 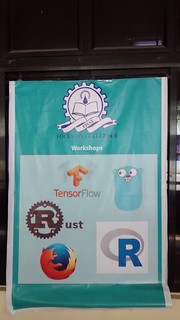 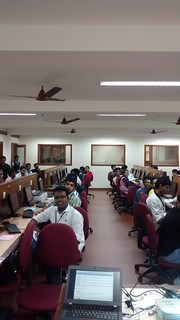 It was surprising to see more than 50 participants (majority undergraduate Computer Science students) ready to dive into Rust! Most of them had very little exposure to systems programming concepts (they had done one or two programming labs using C, but were not in a position to explain the intricacies of stack/heap allocation and the traps and pitfalls associated with malloc/free etc). My idea was to explain Rust in 3 stages, starting out with the easy stuff and gradually moving to more complex things (will write another post dedicated to this). From the feedback I got from the audience, it looks like this approach was effective, but needs more time (ideally, 2 full days). 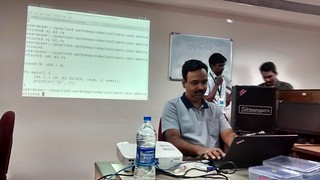 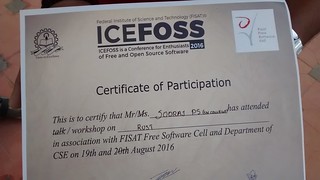 One of the participants was an enthusiastic Rust (and Haskell) programmer, and another one was a school student who was into Go language, astronomy, robotics and such stuff! It is this opportunity to meet people doing interesting things which makes every workshop worth the effort!